My flight home was delayed so won't make today's game. Pretty annoying, but sending lots of positive thoughts to TP.

Made hard work of it in the end. Thurrock seemed to be fitter and we tired big time in midfield. Having been impressed with Marshall pre season he needs to do more for me. Rigg and Murphy outran him when he came off the bench.

But Marvellous Marvin worked hard up front and scored a good goal. Both our goals were very nicely taken. And when we chose to we played some nice football.

I agree. He could teach Phillips a few things about coming for the ball!

Great first half from everyone.  City have learnt that shooting for goal is nothing to be scared about.  Chas looks lean and mean with no beard and new haircut. Great goal Naby, raised the tempo of the game and the atmosphere of expectation around the ground which the second goal confirmed.  Thurrock worked hard, but City contained them.

City sat back far too deep second half but weathered the storm for most of it.  So sorry for Dan Ball when through on goal, would have capped an outstanding performance and leadership by example. When the game ended I almost felt like City had lost such was the battering Thurrock gave City second half.

Congrats to Max O’Leary on debut, looked secure and was unlucky with the deflection for the Thurrock goal. Steve Phillips is having a scan next week on his knee ligaments injury.

Pre-season I wasn't impressed with Lee Marshall or Billy Murphy but both played well today, difficult for Lee coming on in the situation as was but he put himself about which is a lot more than can be said for Stuart Fleetwood...as a famous manager once said "if you can't work your b******s off for twenty minutes laddie, I'll cut them off"...Bath City supporters will accept a lot but failure to work, not just for us, but your teammates, who put in one hell of a a shift today, is never acceptable.

I think part of the problem was that it was too easy in the first half and we expected it to be the same after half time.

As the second half wore on it was reminiscent of previous seasons where we appeared to be playing 4-5-1 with Morgan on his own up front, and we found it hard to get and keep the ball. Says a lot about the half that the nearest we came to a goal was Dan Ball's shot. Thurrock's goal did seem inevitable, and it is probably just as well it didn't come earlier

I think the midfield lacked someone to win the ball, and perhaps misses Chaz there - although both do a good job Rigg and Murphy are very similar. Will be interesting to see what happens when Frankie is fit.

Overall though we got the right result, and after the disappointment of the Weston game I think we would all settle for 12 points from the first 6 games.

I thought it was an entertaining game and Thurrock looked like our strongest opponents so far. Good to see a team come to Twerton and want to play. Agree with the praise for the keeper, while Monthe could well become a cult hero amongst fans. I'm not McCootie's biggest fan but I thought he had a very good first half.

At least it was better than the last time we went 1-0 up over E Thurrock!

I thought East Thurrock tried to play some football, unlike a lot of the teams that come here, and were a useful team.Their officials and manager all seemed friendly. Had a brief chat with the manager after the game and apparently today they were missing the striker who has scored a lot of goals for them over the past couple of seasons. Would seem that was good news for us as with the amount of possession they had in the second half if they had a cutting edge we would have been in bigger trouble.
We have improved and Manny Monthe looks a different player to the one I saw a couple of times last season, so well done to Gary Owers to seeing some potential in him.

I thought we defended really solidly, despite the amount of possession and pressure the opposition enjoyed over us. Only towards the end did we begin to make mistakes and these could have been more costly than the 1 goal against. However, we did score 2 super goals, and I can't have been the only person who was relieved to put the ghost of the FA Cup defeat to rest. 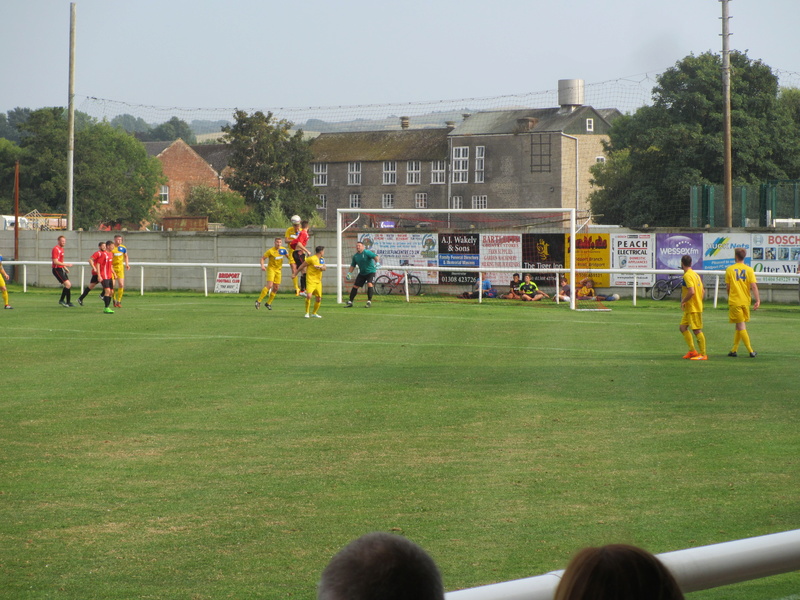 Can't disagree with any comments above and some good points made. I don't want to talk about Fleetwood any more.

Will be a concern that so many players were knackered at the end with the game on Monday. Hope they all had a cold bath.

Agree that Dan Ball would have been my MOM but there were a few contenders. I thought Murphy possibly had his best game and but for a lack of pace Big Chas is a super Centre half.

Also agree with Martin that Thurrock looked a strong side and I'm not surprised a striker was missing. But I would have been annoyed if they scored another because we were't really in any difficulty until the very end.

But the table looks good this morning.

I thought East Thurrock were a better team than WSM and their no.11 was a class act;  if the missing striker is as good as they say he is then they will be challenging for the top...along with City.

Agree with Ben re Chas, he has to adjust for lack of pace with even longer strides.

The City midfield worked very hard so cold baths certainly needed.
Frankie and Andy were warming up so both will hopefully be available soon.

Looking at the City squad of eighteen plus the loan keeper, there aren't any weaknesses, the balance is almost perfect but if we were to lose either of the Dans, Naby and George would have to fill in which does weaken the midfield where they are better suited. All of the squad are equally capable (come on Stuart, you have it in you).

How are Western League teams coping with this new directive re dissent? Most games I go to at that level are dominated by abuse towards officials.

I'm also assuming East Thurrock's keeper was the first Lithuanian to play at Twerton Park since the under 17s in 2002...

Agree mostly with the comments here. I wasn't confident about the keeper as there were a couple of corners where he was flapping but he did start punching much more confidently and claiming the ball better. First game for us so, hopefully, he will build upon that and push on.

I think that our back four is great at the moment but is Batten completely out of favour now? I only ask as I would like to see Chas back sitting in front of the back four as I think he is a slightly better player there, his lack of pace isn't too much of an issue there and the midfield is a bit tighter. Having said that, I can't argue with results and this run doesn't appear to all be down to Steve Phillips.

We've won 4 in a row since Big Chaz moved to the back, so I don't expect him returning to midfield very soon.

(Re Bridport v Odd Down)
"How are Western League teams coping with this new directive re dissent? Most games I go to at that level are dominated by abuse towards officials."
Whilst there was some 'querying' of decisions, I was surprised by the mostly good spirit in which this was played.  Now I know why, if you are correct about a directive.
There were a few clumsy challenges but I think, only one booking.
it was a very open end to end game and some good stuff played.  Three of the goals were well taken and some excellent saves by the Bridport keeper.  Odd Down much the better side though.

comrade powell wrote:We've won 4 in a row since Big Chaz moved to the back, so I don't expect him returning to midfield very soon.

indeed, and we are scoring and this isn't all down to one or two individuals so what do I know?