Many people moan about our attendances. Well, here is something that everyone can do. Share fixture facebook events pages with all your friends. You can share such Facebook events pages to your news feed but it is much better to invite friends individually. Just in case you don't know how to do that, you go to the event page (linked above) press on the "share' button and select "Invite friends" 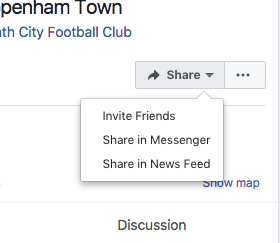 Once you are in that page, you choose "All friends" and select them, press "Invite" and there you go!

Invite all your friends. They may not go to football regularly, they may not go to Twerton Park regularly (or at all) but let them know about tomorrow. What an impression a local derby at a packed out Twerton Park will be. Even if it gets just one of your friends coming along and hooked, they will tell their friends. There are loads of people on this forum, if we all share this Facebook event to all our friends, we can make a real difference not just to tomorrow but to the rest of the season.

Ok, it was a nightmare on Tuesday but the supporters did their bit and turned out in force. Share this event on your page, invite your friends directly and let's get a good crowd on Saturday. At least, you can promise people goals.

Good suggestion to use facebook but if results/performances don't pick up the problem will be retaining existing supporters rather than attracting new fans.

As I said, a fair few new and irregular supporters who I attended with on Tuesday quite enjoyed the match as there were so many goals and incidents. Just needed a red card or two and an on-pitch brawl to make it perfect for the neutral.

I agree about the existing supporters but, as many are now effectively co-owners of the club, a boycott would be counter-productive. It's a whole new era now.

I suspect a significant number of those supporters who invested in the community club are also those who bought season tickets so if they ever decided to stay away it would not impact too greatly. The problem is maintaining the interest of the other 4-500 semi-regulars and then adding to that pool. We had a great opportunity to do this on Tuesday but unfortunately the result and performance has made that task more difficult.

I've decided to check out our last 20 home attendances which were 800+ and include the outcome of those games:

I know this is going to look very messy but hey-ho. 7 wins, 8 defeats, 5 draws. Some of those defeats were pretty rotten, mind.

I suppose it is what happened to the attendances straight after those matches that is crucial. Don't start that, though, Mark. You have done enough here and you probably have gone cross-eyed just from that. Those are very useful stats and somewhat prove something.

I have always thought that, on a match to match basis, results don't make that mauch a of a difference. For instance, a lot of fairweather suportters or newbies may have enjoyed Tuesday's match more than a 0-0 draw. Cumulative success can certainly swell attendances - the Trophy run or, obviously, the season in the Conference, for instance - but one-off ones, I am not sure about. I expect that after, for instance, the 4-1 win against Chelmsford, the attendances weren't greatly swelled and, after the defeat to Wealdstone, they weren't greatly lessened. I could be wrong. The one which I expect did swell the crowds was after the Tyler Harvey game but I expect that was as much about the media coverage and word of mouth. I think we lost that game after.

Here goes, starting from the bottom...

Three days after Darlington we had 788 vs Cambridge United.
The next six were consecutive home matches, the one after Braintree was an FA Trophy win over Basingstoke, attendance 633. Next home league game, a midweek vs Alfreton, there was 739.
After Forest Green we had 649 against Gateshead, long after relegation, our final home match of that miserable season.
10 days after Staines, just 428 attended a 3-2 midweek home defeat against Dorchester.
A week after Salisbury, less than half the attendance (451) witnessed a 3-1 win over Havant.
Weston was Boxing Day 2013, we had 538 through the turnstiles for Staines home next up.
Chelmsford was the first Community Day. 116 watched the next home match, a SPC tie with Taunton. Next home league match the gate was 598 vs Eastbourne (two weeks after Chelmsford).
We played one home match in between the Altrincham, Dover and North Ferriby trophy encounters, when 355 saw the ridiculous 7-4 vs Farnborough.
The next league match after North Ferriby was three weeks later, another Community Day, 775 watched us draw with Concord.
Two weeks after Truro we attracted 710 for a match against Maidstone.
We did lose the game after the Tyler Harvey Weston match, 1-3 at Chelmsford, but the following home match we won, 533 seeing us edge past Eastbourne.
Eastbourne were then the visitors for a 1000+ crowd on Community Day, it dropped to 610 for Dartford's visit two weeks later.
And finally, a week after Wealdstone, nearly 300 fewer (708) saw us hammered at home by Maidenhead.

Ha ha, bloody hell, Mark, you're a young man, surely you have better things to do on a Friday night!

Community days obviously affect the attendances. Interesting the Trophy run crowds. With distant teams the away support would have been small.

When all is said and done fans love to watch a winning team.

Marc Monitor wrote:Ha ha, bloody hell, Mark, you're a young man, surely you have better things to do on a Friday night!

Young, but old enough to not be able to handle 'partying' anymore.

And I'm standing next to a groom today so thought I'd better be good.

Luton Roman wrote:When all is said and done fans love to watch a winning team.

I don't think it is anywhere as simple as that. I think that a crowd splits into three categories.

Firstly, there are the die-hard supporters. We will turn up whatever, week in, week out, whatever the results. Week on week results even seasons' results will not change our match going. We plan our match-going first and foremost and only certain circumstances - weddings, funerals, holidays - will stop us going and even then under duress. In ways, as people who carry on going to something that so often disappoints, we are a marketer's dream but they have no idea what drives us. They will have no idea why Leyton Orient's season tickets have increased for their first season in non-league or that Manchester City's attendances increased the further down the divisions they went a few years ago. However, we know why that happens. Whenever people talk about who the 'best' supporters are, I always say that it is this die-hard core of every club. As I say, results don't really change our attendance even though we are the most pissed off when the team loses or plays badly. However, clubs should not take us for granted. It is these supporters who are bothered enough to organise boycotts and protests if a chairman messes around with the club's heritage or hikes prices too far.

The second group is what I call the fans. Fans attend when circumstances allow, semi-regularly, maybe once a month or a bit more. With clubs at our level and, perhaps, a couple of divisions higher, they are often supporters of other clubs who can't make it to their own club's games that often, want to watch live football and want to watch their local club (these people often being the "Supporters" camp as well). They understand football supporting so, as with the diehard supporters, don't get put off by results and performances so much especially as there is a chance they may not be attending consecutive matches as much and, also, it is the social side of the match day experience that they are there for (a great part in all our attendance). They will be certainties for bigger matches and have a fair idea of what is going on around the club, how the team is doing and where they are in the league. Again, they aren't so attached to the results themselves and are much less likely than the diehards to get pissed off by, for example, a result like Tuesday's or yesterday's (especially if they weren't there).

The third group is the new or casual attender. They are the sort of people who may not even be football supporters. They may be general sports fans, parents taking their children, people who want to take part in a local social community event or tourists. They will be attracted along by circumstances such as there being a lot of media coverage around the club, just fancying it or being brought along by members of the first or second groups. They will very rarely plan more than a week ahead if they are going to go. They attend Bath City and, often, football in general like I attend speedway. Results will mean practically nothing to them and, indeed, a match like Tuesday's may attract them more as it had lots of goals, incidents and plenty of atmosphere. Certainly, they won't be put off as they aren't so attached to the team to get pissed off about the performance.

You will notice that, in all three groups, I have repeated that results and performances - certainly week to week and, to an extent, over a season - aren't that important to all three groups. Us diehard supporters go anyway, the last two groups' attendance will be based on their own circumstances. However, the last two are more likely to come along to matches that get a lot of attention in the media or through their friends. Of course, one of the ways that the club gets more media attention is if they are having a successful season so, cumulatively over a season, a team playing well will attract better crowds but, as I say, one match, even a couple in a row, will not put off a lot of supporters, fans and casual or new attenders. Of course, one issue with, if not our success, then our position is that non-league just doesn't register with many people. Indeed, even for many football supporters, life doesn't exist below the Premiership, let alone below the League. However, conversely, lower- and non-league football is very well attended in this country compared to Europe (Serie D, for instance, has an average attendance of around 500)

This isn't just me saying this. During the Bid, a fair amount of discussion was had about with people about they enjoyed about Bath City and what would keep them attending. Football results were mentioned a surprisingly little amount of times and the matchday experience - ease of getting tickets, friendly atmosphere, standing allowed, access to food and drink etc - feature quite a lot. I think, as Bath City supporters, we forget what people appreciate about our club and Twerton Park.  As someone who has migrated from another club, I have a slightly different perspective. For instance, I know that a visit to Twerton Park is a welcome reminder of how football used to be before the Premiership millions. However, until listening to others' reasons for attending (or not), i didn't realise quite how little results or style of football (from match to match) impacts upon them.