Bath City pulled off a spirited second-half fightback to earn a share of the spoils at Vauxhall Road, home of Hemel Hempstead Town.  Gary Owers’ side trailed by two goals at the interval but made the most of the downward slope and following wind to twice level the scores.

City, playing against the elements, fell behind in the very first minute of the match when Graeme Montgomery latched on to a through ball, shrugged off the challenge of Jack Batten, and drove his low shot across Max O’Leary and into the far corner of the net.

The visitors tried to find an immediate response, but when Lee Marshall’s pass found Andy Watkins, the striker’s shot was deflected for a corner.  Beyond that, Bath struggled to make any impression on the home defence, and Hemel continually wasted their possession by over-hitting long balls down the slope straight through to O’Leary.

Frankie Artus tried his luck from 25 yards on 15 minutes, but was too high to trouble home keeper Jamie Butler and, at the other end, Jack Kelly flashed a low ball across the face of O’Leary’s goal that was turned behind for a corner.

With 25 minutes on the clock, David King delivered a free kick into the City box, only for Mitchell Weiss to head well wide of the target.  However, The Tudors doubled their lead on 32 minutes following another defensive mistake.  A tussle for possession midway inside the home half ended with an aimless downfield punt towards the Bath area.  O’Leary raced off his line, but Weiss was able to dink a header over the stranded custodian and celebrate as the ball bounced serenely into the unguarded net.

Montgomery’s free kick from distance in the 34th minute was narrowly wide of the post, as the home side threatened to take complete control of proceedings.  So much so, that the City manager rang the changes immediately afterwards, with Naby Diallo and Nick McCootie replacing Josh Hutchinson and Batten respectively, as he sought an improvement from his side.

Watkins’ cross from the left on 40 minutes just eluded Diallo, and James Potton then sliced a shot well wide of O’Leary’s goal.  The final chance of the half fell to Watkins when his angled drive was beaten away by Butler, and McCootie was flagged offside as he tried to make the most of the rebound.

There were hopes amongst the travelling support, that their team’s fortunes would improve after the break, particularly with the gradient and strong breeze now in their favour.  In the event, there was little evidence in the first nine minutes to suggest any improvement.  However, The Romans finally sprang into life after 54 minutes when Marshall sent a dangerous free kick into the Hemel box, and with Morgan in close attendance, the ball found its way into the net beyond Butler’s desperate dive.

Penalty appeals were waved away a minute later by the referee, Mr. Josh Smith, when Jake Robinson went down in the City box.

McCootie bustled into the area in the 56th minute and Butler did extremely well to push his effort behind for a corner, but five minutes later the visitors had restored parity.  Another corner was sent in from the left by Artus which was partially cleared.  The ball fell to Hemmings with his back to goal on the edge of the box, who turned adeptly, and curled a sumptuous shot into the far corner with Butler clutching at thin air.

Bath were now well on top, but the hosts always remained dangerous on the break.  Matt Saunders headed uncomfortably on to the top of his own net following a Marshall corner kick, before Watkins made way for Shaquille Hunter on 68 minutes.  Shortly afterwards, Manny Monthe’s shot from inside the six-yard box was clearly deflected for a corner off a defender, only for the officials to award a goal kick.  The protestations from the incensed away bench resulted in a stern and lengthy lecture from the referee.

Montgomery sliced an attempted shot horribly high and wide, but it was the visitors who continued to pose the greater threat upfront.  Hunter galloped into the box and went down under King’s challenge but, again, the ‘man in black' was unmoved.

It was somewhat against the run of play that Town regained the lead on 76 minutes when Robinson crossed in from the right.  The ball reached the unmarked James Kaloczi beyond the far post, and he powered his header into the roof the net, giving O’Leary no chance.

Rather that feeling sorry for themselves, City rolled up their sleeves and went in search of another equaliser.  Artus’ rasping shot from 25 yards narrowly cleared the angle of post and crossbar, and the scores were once again level on 80 minutes.  Marshall was again the provider with a free kick into the penalty area which was flicked on by Hemmings.  The ball fell perfectly for Morgan, who nodded past the hapless Butler from 6 yards out.

The pace of the game continued as both sides went in search of a winner.  Robinson turned inside the City box and saw his angled effort fly just wide of O’Leary’s far post, and then Morgan burst clear of the Hemel defence, only to be denied by the rapidly advancing Butler.

Oliver Thorne headed goalwards from a right wing corner, forcing O’Leary into a save under his crossbar, and Hunter found his way to the home by-line before crossing to McCootie, whose goalbound shot was blocked by a defender at the foot of the post. There was still time for Hunter to create some space on the edge of the box, and was desperately unlucky as his low shot clipped the outside of the post with Butler beaten.

This was a hard earned point for The Romans that had seemed highly unlikely at half time.  Their tired looking first half performance was not totally unexpected following their FA Cup replay exertions on Tuesday evening, but it was perhaps more down to them struggling to master the adverse wind and slope.  Certainly Hemel Hempstead found similar difficulties after the break and, conversely, City produced a rousing performance.  Despite the conditions, both teams contributed to an entertaining game, and a draw was probably the fairest outcome.

Great goal. It looked wind assisted but film shows a curl.
I thought a result was still on at 2 down and so it proved.

I think the gaffer will see it as points dropped but an entertaining game with great City support in the second half.

I was wrong. He was happy with the point but not happy with Jack and Josh......both good players who need to lift it. Sure they will.....

Good goal, worthy of a spot on goal of the month,MOD

Can someone confirm who scored the first goal?

I see that it has been credited to Marshall and Kevin's report above suggests that his free kick went straight in (Marshall sent a dangerous free kick into the Hemel box, and with Morgan in close attendance, the ball found its way into the net beyond Butler’s desperate dive).

However, on the club website there is a report from the Chronicle (who I doubt were even there) where it says "On 55 minutes, the visitors pulled one back. Lee Marshall's dangerous free-kick saw Morgan escape from his marker and provide the slightest of touches to divert the ball out of Butler's desperate reach".

LB wrote:Can someone confirm who scored the first goal?

I was right behind the goal and, in all honesty, I am not sure if Morgan got a touch or not. My initial instinct was that he had just got a toe end on the ball and the congratulations were certainly centred around him. However, others around me were of the opinion that the ball had gone straight in. I guess that the only person who really knows is Morgan and, if you ask him, I am sure that he would say that it was his goal.

I suppose that, in the end, all that matters is the ball went in!

Sorry for 'sitting on the fence', but that is why I worded my report in the way that I did!

LB wrote:However, on the club website there is a report from the Chronicle (who I doubt were even there) where it says "On 55 minutes, the visitors pulled one back. Lee Marshall's dangerous free-kick saw Morgan escape from his marker and provide the slightest of touches to divert the ball out of Butler's desperate reach".

I was there and did the Chron report. Problem is I'm doing it whilst producing/commentating on the radio so it can be a bit slack. This was in the half I was able to make notes. I just assumed Morgsn got a touch, am sure he was happy to take the congratulations.

I was within yards and it was Morgan's goal. His job was to follow that free kick in. Slightest of touches and he celebrated in front of us.

I was right in line with the free kick and I saw no touch! (there's points at stake in the first goals compo here...)

Well......I was behind the goal and once the kick had been taken, my eyes were on Marvin and he watched the ball all the way, positioning himself perfectly before, IMO, glancing the ball into the back of the net.
But, as I went to Specsavers, I may be wrong! 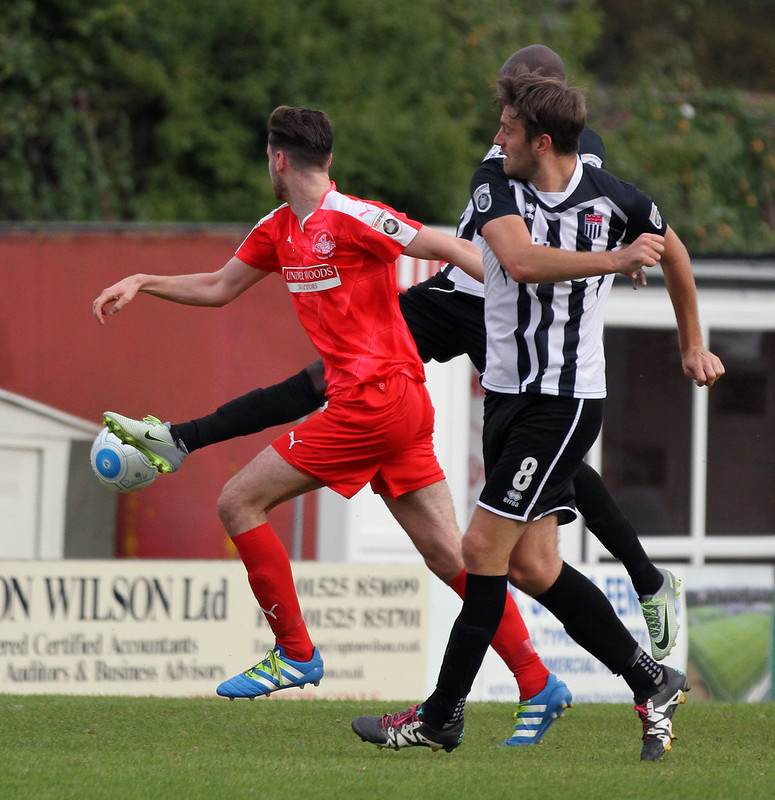 This is the closest shot I got.

Can anyone tell me if Darren Edwards should have been awarded a penalty at Havant?!

Sir Ged Roddy wrote:Can anyone tell me if Darren Edwards should have been awarded a penalty at Havant?!

It was a dive.....after he had been tripped!

I thought Manny Monthe's goal from that game was about 20 yards out, watched again and it was nearer 12!

Did I ever mention Sir Richard's goal at Weymouth?

Scored at Weymouth but headed from Portland, that one?

Don't be ridiculous! - headed from Poole at least...

Oh do stop ! It was a tap in. I said to everyone on Saturday that we were being set up for a storming second half comeback. Well, if you say it enough it's bound to happen sooner or later. I thought it was Marshall's goal and Captain Marvel was doing what all strikers do. After all batsmen never hit the ball when they get out.

comrade powell wrote:Don't be ridiculous! - headed from Poole at least...

After the years of debating this, I'm sure the truth will come out that Bourne didn't score at Weymouth that day at all. Or even play. And Phil was probably chauffeured to the game rather than cycle to it.