Bath City suffered a crushing defeat at windswept Nyewood Lane, home of Bognor Regis Town, as a stoppage time penalty handed victory to their Ryman League Premier Division hosts. As at Wealdstone a week earlier, City paid the ultimate price for not turning their domination into goals.

The first half saw the Somerset side play with the keen and blustery wind in their favour, but it was Bognor who began the more brightly. In the 3rd minute, Ollie Pearce delivered a cross from the right that was headed wide of the far post by Snorre Nilsen. City responded with a long-range shot from Chas Hemmings, but he was horribly high and wide of the target.

Home full back Harvey Whyte played another cross into the danger area from the right wing on 8 minutes, but Chike Kandi guided his effort wide of Steve Phillips’ near post.

Bath were beginning to make use of the elements, and were desperately unlucky not to take the lead in the 12th minute. Dan Bowman crossed from the right, and Dave Pratt laid the ball back into Andy Watkins’ path from the byline. The striker saw his first shot hit the near post and, when the rebound eventually came back to him, he stabbed his follow up effort against the base of the other post, with the ball bouncing kindly into the gloves of Town keeper Grant Smith.

Bognor skipper Jason Prior headed wide of the far post from James Crane’s cross, but it was City who remained generally on top. Pratt’s shot from 20 yards was comfortably collect by Smith, but the keeper was fortunate not to be punished, in more ways than one, for a glaring mistake in the 29th minute. Smith tried to shepherd the ball out for a goal kick wide out on the left and was robbed by the lively Watkins. The forward’s effort from an acute angle found the side netting, but Grant was extremely lucky that neither the referee, Mr. Adrian Quelch of Christchurch, nor his assistant spotted a glaring tug on Watkins’ shirt as the Cityman took aim.

The hosts came close to taking the lead on 33 minutes when Crane’s cross from the left picked out Pearce, but his shot struck Phillips’ post and, when the ball came back to Stuart Green, his drive was blocked.

The remainder of the half was fairly even and uneventful, except for a fracas in midfield that ended with Craig Robson’s initial hefty lunge on Brad Williams drawing a yellow card from Mr. Quelch.

As the second half got underway, the conditions now favoured the home side, and they put the City defence under early pressure. Pearce’s cross was met with a header by Kandi that forced Phillips into a useful diving save. The visiting keeper then produced an excellent fingertip intervention to divert Pearce’s low cross-shot beyond the far post, and Crane nodded tamely over the crossbar from the resulting corner.

Thereafter, City held the upper hand for long periods and the majority of play was in the Bognor half. Dan Bowman fired high over the bar from outside the box in the 53rd minute and, five minutes later, Pratt ran at the heart of the home defence, before his powerful shot was pushed round the near post by the diving Smith.

On the hour mark, Sami El-Abd was booked for a foul on Watkins, who the victim of some particularly harsh treatment throughout by the home defenders, all of whom were struggling to cope with his pace and trickery. Kaid Mohamed’s subsequent free-kick fell to Dan Ball whose shot was deflected over the bar, only for a goal kick to be awarded.

City continued to dominate and Mohamed’s 72nd minute shot was blocked into the path of Pratt, but the striker under hit his volley from the edge of the box and Smith was able to gather without undue issue.

A Mohamed corner two minutes later almost resulted in a break away goal for the Rocks. Substitute Alfie Rutherford picked up the ball inside his own box and raced the length of the pitch but, in the end, shot wastefully over the crossbar.

Nick McCootie came on for Mohamed after 76 minutes as City continued to seek a breakthrough, and they again came close with eight minutes left on the clock. An excellent flowing move saw Watkins find space down the inside right channel, and he looked on in horror as his fierce shot clattered against the face of the near post with Smith beaten.

With City looking comfortable and the game entering stoppage time, a Tuesday evening replay at Twerton Park was beckoning, but there was to be a cruel twist for the visitors. Substitute Gary Charman turned inside the City box and was caught by Ball’s stretching challenge, with Mr. Quelch having no hesitation in pointing to the spot. After a lengthy delay, Prior kept is cool and drilled the ball into the bottom corner to Phillips’ right, giving the keeper no chance.

There was still time for Watkins to be pushed to the floor inside the box by El-Abd in an ‘off the ball’ incident, but the referee showed no interest.

The final whistle was met with joyous scenes from the home players and supporters, but City were, once again, left to reflect on missed opportunities. It cannot be disputed that the visitors had the better of the game in difficult conditions, but the general lack of goals inevitably leads to vulnerability at the back. There is no doubt that they were unfortunate to see Watkins strike the woodwork on three occasions but, put simply, periods of dominance need to be capitalised upon.

A very fair report as always. Pleased you mentioned the shirt pulling incident, which many City fans behind the goal and our players seemed unaware of. It was very clear to those on the side and would have resulted in a red card if the ref had seen it. And presumably it was missed by the foul mouthed local who was standing near us and giving grief to Yuffie!

He was a charmer, wasn't he.

And, with one famous exception, a still picture can rarely prove an incident but this one would seem fairly clear cut. 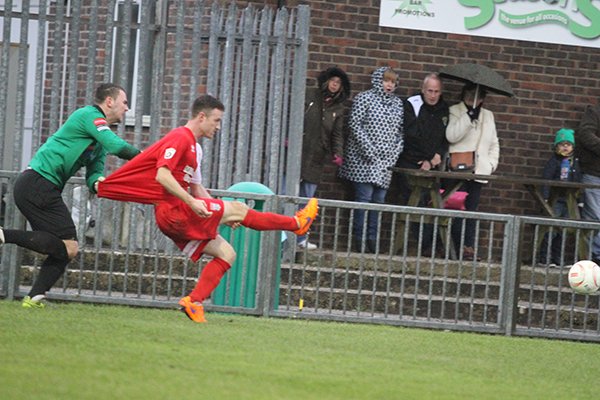 I imagine Howells or Britton were blocking the officials view so it was their fault the ref didn't do his job.

McCootie for Mohamed substitution; was that a good decision at the time?

Yes, probably. Mohamed had been poor and I felt McCootie might get on well against their big defence. I can't really see how anyone can be blamed for yesterday, we made chances, hit posts and lost to a last minute penalty.

I read yesterday that Leicester had been caught offside just FOUR times all season! McCootie was flagged twice in five minutes after coming on. An impact sub he is not - neither is he the answer to our goal scoring problems.

Ashley wrote:I can't really see how anyone can be blamed for yesterday, we made chances, hit posts and lost to a last minute penalty.

comrade powell wrote:I read yesterday that Leicester had been caught offside just FOUR times all season! McCootie was flagged twice in five minutes after coming on. An impact sub he is not - neither is he the answer to our goal scoring problems.

If only we'd signed Vardy instead.

I imagine Howells or Britton were blocking the officials view so it was their fault the ref didn't do his job.

But the officials shouldn't have been sitting on the bench with them in the first place!

Ashley wrote:I can't really see how anyone can be blamed for yesterday, we made chances, hit posts and lost to a last minute penalty.

Quite. Don't ever let it be said that matches are won by scoring goals.