Bath City produced an enterprising performance at Hayes Lane, home of Skrill South Division leaders Bromley, and deservedly came away with a point from a highly entertaining game.

The visitors set up with Dan Ball and Dan Bowman playing outside a central defensive three of skipper Andy Gallinagh, Sekani Simpson and the returning Phil Walsh. Chris Allen, Noah Keats and Adam Connolly took up the midfield positions, with Josh Low playing a role just behind lone striker Andy Watkins. The result of this was a team display that was unrecognisable from the desperate disappointment of the previous Saturday at Mayday Trust Park.

City started brightly and could have taken the lead as early as the second minute when Walsh met an Allen corner kick with a header, but he failed to make good contact and the ball was blocked by a defender.

Despite both sides playing some neat football early chances were at a premium, but the Somerset side took the lead in the 14th minute when Watkins’ persistence won a free kick out on the right flank. Allen delivered the resulting kick to the front post, and Gallinagh flicked the ball towards the penalty spot. Ball did well to direct his header goalwards, and home keeper Joe Welch had no chance as the ball looped beyond his reach into the far corner of the net.

This stung the hosts into action and they restored parity on 20 minutes. Jay May won a header in the City area, and Bradley Goldberg made no mistake from 18 yards as he drilled a low shot beyond the rooted Jason Mellor.

Buoyed by their success, Bromley began to turn the screw and put the Bath defense under real pressure for the first time. Low lost possession in his own half to Goodberg, whose ball into the box was hooked wide of the target by the well-positioned Danny Waldron. Jack Holland headed wide from Albert Jarrett’s free kick and, on the half hour mark, Pierre Joseph-Dubois nodded over from close range following Jarrett’s cross, when he really should have scored.

The visitors gradually came back into proceedings and Walsh volleyed high over the bar from an Allen corner kick, but they had an outstanding opportunity to restore their advantage in the 36th minute. Gallinagh’s long ball fell perfectly into the path of Low who found himself clear on goal, only for his flicked effort to be saved by the feet of the advancing Welch.

At the other end, Goldberg burst into the penalty from the left, and Mellor made a fine diving save to keep out his angled effort. The final chance of the half presented itself to Joseph-Dubois when he was put though by Ali Fuseini, but he dragged his shot wide of the far post.

The second period saw Bromley pressing forward from the re-start, with Fuseini curling a shot over the bar from distance, and then Mellor was forced into a useful diving save by Goldberg. However, the hosts could not be denied on 50 minutes when they forged in front in truly spectacular style. Fuseini picked out Waldren with a chipped ball across the City box, and the midfielder unleashed a blistering first time volley from 18 yards that thundered past the bewildered Mellor.

Lee Howells responded by bringing on Ross Stearn for Bowman, and City continued to play their full part in the match as they went in search of an equaliser. Ball crossed from the left towards Keats, whose toe-poked effort was clawed round the post by the diving Welch.

However, The Ravens should have put the game out of reach in the 64th minute when substitute Brendan Kiernan broke clear and danced round Mellor, only for his under-hit shot to be cleared off the line by the excellent Simpson. They were made to pay for this profligacy two minutes later as City levelled the scores. A neat passing move ended with Low sliding the ball into Watkins’ path, and the striker made no mistake with a confident finish, finding the corner of the net as Welch vainly tried to close him down.

The home team once again raised their game, and carved out a golden opportunity to re-take the lead on 69 minutes. A cross from the left found May unmarked at the far post, but Mellor produced a breathtaking save to block his point blank shot, leaving the forward holding his head in utter disbelief.

Watkins robbed Dean Pooley on the half way line in the 72nd minute and drove towards the byline. His eventual cross picked out Stearn beyond the far post, but the substitute fired his angled shot over the top.

The final fifteen minutes saw Bromley pressing forward in numbers and exerting considerable pressure but, despite earning a series of corners, they could find no way past a resolute City rearguard. The closest they came to finding the breakthrough was a back-heel from Nic McDonnell three minutes from time that passed narrowly wide of the post.

This was a fully deserved point for City, who battled toe to toe with the high-flying home side, and gave an excellent account of themselves. Bromley will no doubt feel that they had sufficient chances win the game, but The Romans always looked dangerous on the break and ensured that the hosts could not throw caution entirely to the wind. This was certainly a morale boosting performance, and provides some much needed confidence ahead of a demanding assignment against Ebbsfleet United at home on Tuesday evening.

I am glad your predictions about the referee didn't materialise. After Weston we didn't need any more bad luck.

were Bromley as cynical at home as they were at MTP?

BenE wrote:were Bromley as cynical at home as they were at MTP?

No, they looked a lot better side than they did at Twerton and played some very good football. There was no real play acting from them yesterday. It is, however, a bit ironic that some comments on the Bromley forum indicated that City were guilty of underhand tactics!

QUOTE 'it would have been nice to have had a stronger referee who would have had the courage to curb the antics of some of the Bath players, their number 9 in particular.'

Our number 9 was none other than Josh Low!

Most their other posters thought that City played their full part in an entertaining match which is a much more accurate assessment!

No, not at all. Maybe they underestimated us, but they were sluggish at the start and we took advantage. Once they equalised, they showed in patches why they are at the top. Although frustrated by their general lack of dominance, they kept trying to play football and carved out some good openings. At times they and the home crowd got very frustrated with the ref, who did make some baffling decisions. A booking for a slight challenge on Mellor was followed by much worse incidents going unpunished. Low's deserved yellow card for a very late challenge should have led to his dismissal as he had cynically taken out a defender in the 1st half but got away with it. And how their defender escaped after chopping down Watkins (?) as he broke with the ball into the box was another baffling decision.

Video highlights of the match now on Bromley TV.

MOTM yesterday between Mellor and Watkins with strong cases for both really.

Thought Low had a very odd game - moments of brilliance (the pass for the equaliser) and also some very ordinary moments (the one on one).

Whoops! I posted my MoM on the wrong thread. Simmo for me.

BenE wrote:were Bromley as cynical at home as they were at MTP?

QUOTE 'it would have been nice to have had a stronger referee who would have had the courage to curb the antics of some of the Bath players, their number 9 in particular.'

Our number 9 was none other than Josh Low!

Brilliant. they must be referring to him pretending to challenge for headers and not leaving the ground and doing an impression of tracking back!
It is funny they are bemoaning our 'antics'. One of their more unfortunate habits when they came to us at Twerton was squealing in pain whenever they were fouled. i dont think i have ever seen a whole team do this - it must be coached and it was embarrassing especially when they are mostly built like brick outhouses.

There was a superb moment near the end that they might be on about. Josh armed off their player and somehow got a free kick for it.

Shocking quality highlights - it was like watching a Charlie Chaplin movie in colour.
Shame they only did action replay for thier own goals. 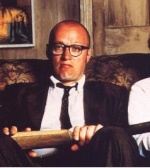