I guess there is some substance in this often mentioned word by Arch in his interviews.

This season we will end up playing 57 matches, which is one more than the previous most recent record of 56, when we won the Southern League in 2006/07. That season took in five replays.

It didn't quite beat the 58 in 1999/2000 when we chased Boston for the title. That said, that included runs in the Southern League Cup and we reached the Somerset Premier Cup Final, not quite as competitive. I don't remember similar devastation losing to Bristol City as some people felt after North Ferriby.

57 matches for a semi-pro side is a hell of a lot, given top flight teams with their squads of 25+ moan about playing less than that!

To be fair, I'm pretty tired of this season now, which has seemed to drag on for a few weeks longer than necessary. All I hope for is the lads raise themselves for the Saturday home game (as they did on Tuesday) and give themselves a decent send off.

its a good job Salisbury went bankrupt them as that would be two more game. been a dramatic season, getting hammered by gritty teams like concord and whitehawk early on then beating 3 conference premier teams. never boring following the stripes. 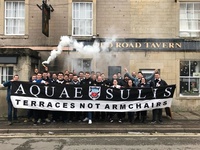 Different era maybe but it makes you wonder how we managed to play 69 games in 89/90 season including 8 players who played at least 60 games each.

I noticed that in the 1974-75 season Colin Tavener made 78 appearances. That was in the days when floodlight competitions were all the rage. Seems ludicrous now.

Micawber wrote:I noticed that in the 1974-75 season Colin Tavener made 78 appearances. That was in the days when floodlight competitions were all the rage. Seems ludicrous now.

I love two things about that! Firstly, having grown up watching football with most clubs having floodlights (wonder how few still don't, Bradford Town only installed there's relatively recently) the idea of a competition based soley on them is superb!

Secondly, 78 games! I mean wow, that would have been a long old season, although I believe Pele once played over 100 games in a season for Santos as they had so many friendlies using Pele's fame to make them money.

That's one stand-out thing about playing at Conference South for us.

Most away clubs seem to feature players who have played for about six different clubs at this level, some are on their third this season alone. For us it's pretty much us or Weston, otherwise you need to be willing to travel.

My perception is that we must do more travelling than most. Even ignoring where players live, most of the trips seemed to me down the M4 and a lot arond the M25. Perhaps those with more time on their hands and more skills can work it out. I remember it dawned on me when listening to an interview with a Concord pkayer who mentioned long trips to Bath and WSM