Received this today - I've asked for an email address. I will raise this at tonight's Society Board meeting but if you are interested in having a few beers with our Italian friends at the WSM game please let me know.

We are supporters of Calcio Lecco 1912, as you probably know, in the season 1977
we won against your team the Anglo-Italian Cup; so this June will be the 40th
anniversary.

We are going to organize an event to commemorate this victory (the most important
Trophy in our ultra-centenary history). Our idea is invite some Bath City supporters
at this event, and maybe organize also a football match.

We would like to meet people from Bath with the hope that you will accept our
invitation starting a twinning and friendship with you.

So: 6 people from Lecco are going to come to your city to meet you, Romans
Supporters, explain our idea, come with you to see the Bath City FC away match vs
Weston super mare and of course drinking beers together. We will come to Bath on
friday 3th February and come back to Lecco on Sunday 5th.

If you like this proposal please let us know how we can organize a meeting in these
days.

Thank you
Looking forward to hearing from you.

Just to add that the Lecco fans will hopefully arrive in Bath by early evening next Friday but their flight from Stansted is very early on Sunday morning. So basically they only have the Saturday with us. It would be great if some supporters could be around to meet up. I'm told that they are about 30 years old.

I've posted this on Facebook as well, hopefully something will come together.

There is also the possibility of doing something with Alkmaar this calendar year, as it's the 70th anniversary of the Bath/Alkmaar twinning.

I hope these guys realise the match is at Weston super Mare.....in February.....high tide at 11.51......I wouldn't buy an advance train ticket from Yatton yet alone a flight from Italy for this match!!
Still, I'm sure Mr O'Leary will look favourably on a refund when the ref calls it off at 14.55

And if anyone is thinking of taking up the offer of a visit to their ground, Lecco is relatively easy to get to from here. The flights that Easyjet tell you are going to Milan from Bristol actually chuck out at Bergamo, which is only about 25 miles away from Lecco, and are generally cheaper than a day return ticket to Reading!

They're also plumb last in the Italian fourth tier, so we should arrange a friendly!

Roy D Hacksaw wrote:They're also plumb last in the Italian fourth tier, so we should arrange a friendly!

What are you suggesting, our supporters against their 1st team!! If it's our 1st XI, I'm definitely not cycling there like I did for Torhout.

Roy D Hacksaw wrote:And if anyone is thinking of taking up the offer of a visit to their ground, Lecco is relatively easy to get to from here. The flights that Easyjet tell you are going to Milan from Bristol actually chuck out at Bergamo, which is only about 25 miles away from Lecco, and are generally cheaper than a day return ticket to Reading!

Flying there might be a lot quicker, but you'd miss out on one of Europe's iconic rail trips through the Alps on the Bernina Express and then down the length of Lake Como from Tirano.

They must be very mad and very young, but, OK, they're football supporters. I shan't be able to go and share Yuffie's serious doubts about whether the WSM game will be played (loved the posters, by the way).

In case you missed it, here's a bit from programme notes earlier in the season. I think this is a great initiative and fully support it.

If you're looking for info about the club and town, please note 'Lecco' is our target, not Lecce which is right down on the heel of Italy and also has a football club.

The Italian leg of the Anglo-Italian Cup was held in June 1977.  City beat Parma 1-0 and despite losing to Teramo, found themselves playing Lecco in the final. Club Secretary Val Burroughs takes up the story. Her memories of those glory-glory years will figure largely in this series of articles about Bath City in the 1970s:

“We went to stay in a resort called Pescara down on the Adriatic coast. Anyway, we’d only been booked for a week, because no-one thought that we would get to the final. But we did, and consequently we had to leave the hotel we were in, we had to move right up to Lake Como. We had no money, so what happened was most of the directors went home. They went home and wired money back, which meant I had to go to the bank and get the money and I had to go to the railway station and get all the tickets and then we had to organise a hotel in Lake Como. But I loved it, I was in my element. It was lucky I was there because I don’t know what they would have done without me.
Lecco won, but he Italian trip in June 1977 was a bit of a jolly for players and staff, as Val Burroughs recalls. Val had such a good time that when I spoke to her about the trip in 2016 she said “I can’t remember what the results of the matches were!”

Some great photos of the Lecco fans on Weston beach yesterday can be found on the club website and twitter account. Well done to Jon Blain, Chris Reed and others for looking after them during their stay  - despite the postponement I hear they had a great time and are very keen to host City fans at their anniversary celebration in the summer. Below is a photo of their visit to TP yesterday morning - they loved the ground! 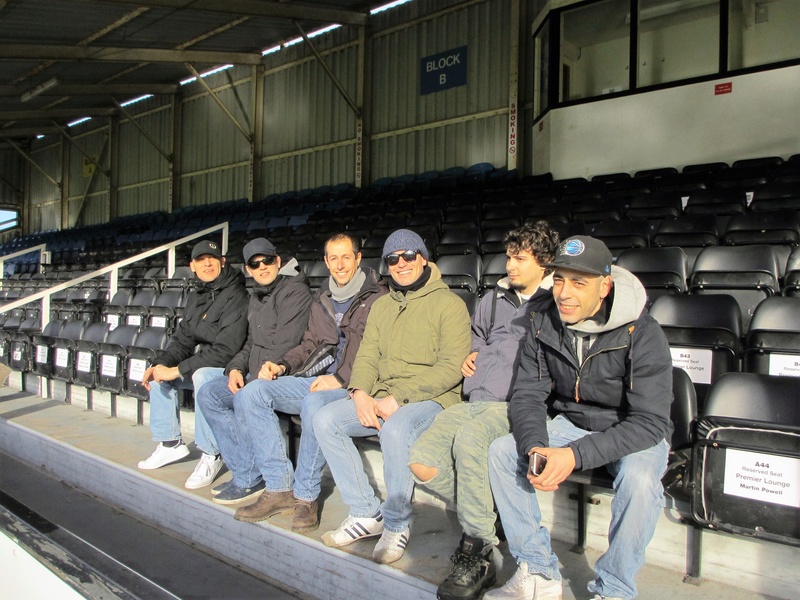 Good job they didn't sit on your seat Mr Powell!

They gave me a nice Lecco scarf - very generous and to replace my Inter scarf which they didn't approve of!

I also noticed a number of Lecco stickers posted around the town centre on my lunchtime stroll about. The boys have certainly left their mark! 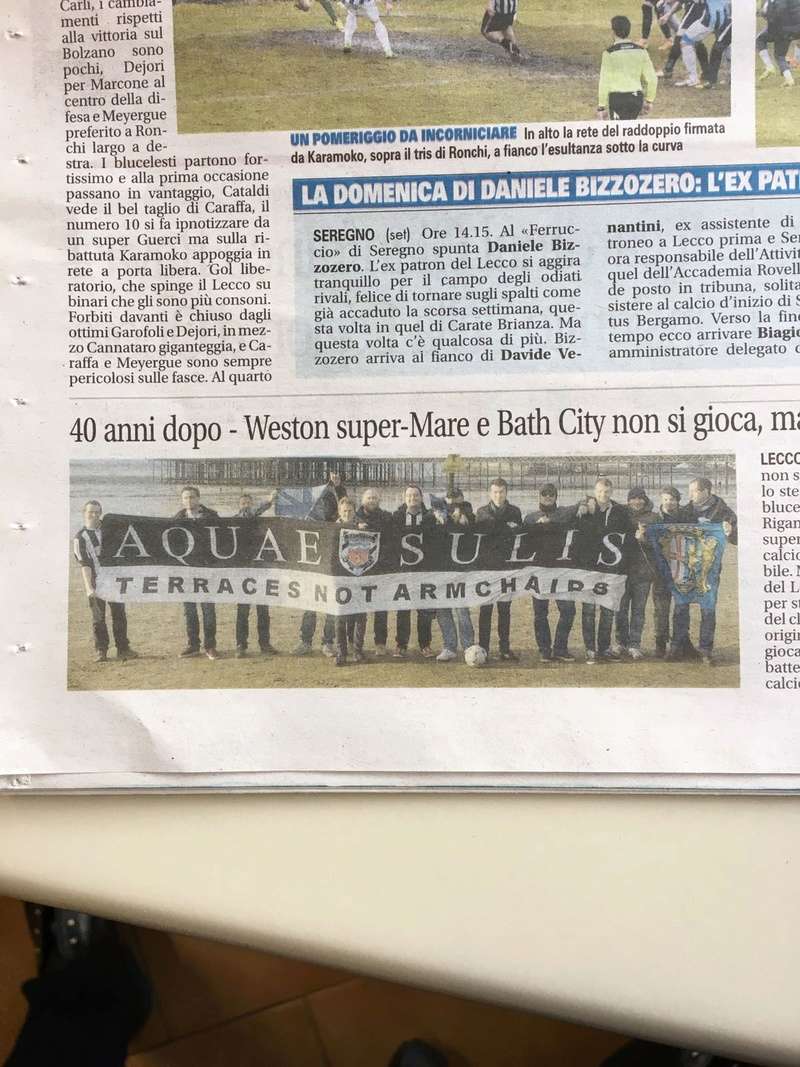 Made it into their local paper as well!

Top job by those who met up with them. Pity they didn't get to see a good match (or even any match!)