It was only 16 years ago! Film here https://www.youtube.com/watch?v=_R76wGZOMZM and it kicks off at 1m 40secs. Well done Jono!

Yes he got the ball but it was tackle from behind, so a foul

Sir Ged Roddy wrote:It was only 16 years ago!  Film here https://www.youtube.com/watch?v=_R76wGZOMZM and it kicks off at 1m 40secs.  Well done Jono!

The most dreadful colour combination we've ever appeared in....

Dodgycarpet wrote:Yes he got the ball but it was tackle from behind, so a foul

I am not quite sure that is how it is written in the Laws of the Game even though it is very often interpreted like that.

None of us had the referees view of the incident. Jones could easily have gone through the attacker to get to the the ball.

But it is the attacking player who gives it away. He doesn't know where he is hurt. Certainly not the back of the ankle where it should be a bit sore.

But as I said in my first post a predictable outcome.

Judging the intent of the tackler;
Noting the speed of the approach by the tackler on the player about to be tackled;
Looking for any signs of aggression shown by the tackler; Either smile next time you tackle or sing a hymn as your charging in
Recognizing any signs of violence associated with the tackle; Was the player carrying a baseball bat and was his face covered with a ski mask
Position of the tackler: is the tackle from the back, or the side, or from in front?
What opportunity the tackler has to play the ball fairly.
Taking into account the atmosphere of the game, or the feel of the game 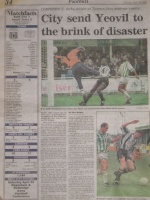 Position of the tackler: is the tackle from the back, or the side, or from in front?

suggests that tackling from the back is an issue.

I'm assume those are quotes from the Laws of the Game?

Re-assuring that the video confirms what I thought I saw with my own eyes, that Darren got the ball - despite what his critics will say (and I have been one) when you see it you have to say that it was a good tackle, and that the referee got it wrong.

It was interesting that he didn't need to speak to his assistant before sending Jones off (as he could have done if his view was as obscured as some suggest) but did when there was a risk that he might have had to send the Wealdstone keeper off shortly afterwards!

It will be interesting to see if we appeal the sending off and if so what the outcome will be - I think I can probably guess!.

Those incidents happening so early really set the tone for the game and clearly fired City up, as it wasn't really apparent that we were a man short. The Wealdstone number 3 was perhaps a bit unlucky as they were two fairly soft yellows, but in the context of the game neither was too surprising.

The Stones were pretty happy to take a booking for a professional foul to stop a potential attack. The No3 must have forgotten he'd already been booked.

comrade powell wrote:
The most dreadful colour combination we've ever appeared in....

Worse than the eye-bending stripes and blue shorts at the ill-fated East Thurrock cup game?

I was going to mention that. Or black and white stripes, white shorts and yellow socks at Cheshunt once.

Back to my point i will keep making - why do we have an "away" strip at all???
When i watch city away i want to see us in our B&W stripes!

Also when it happened you thought Jones was favourite to get their first confirmed by the video: the lack of pace resulted in a safe situation turning into a sending off

I was level with the tackle at it looked pretty awesome. Yes he was outpaced, but made up for it with a great tackle.... which we would also still be talking about had Jones stayed on, maybe that's where the petulant after came from.